I spent this past Sunday at RoboGames 2011 up in San Mateo. The point of this excursion was for an opportunity to research robots and autonomy, but it devolved into watching robots mindlessly destroying each other followed by a photo-op with the Mythbuster's Grant Imahara. 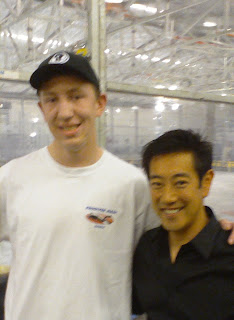 At this fiesta of scrap metal, I got some pretty cool footage of not just destruction, but some interesting autonomous robots. They follow after the jump. 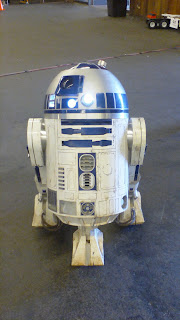 I will talk about the combat last, as that is what people do. Walking into the event center, my first impression was "my, what a lot of kids there are!" And indeed, the place was filled with some adults, and lots of little kids under half my height. The main attraction was most obviously the combat, with three walls of bleachers completely filled almost the whole day with a plethora of people standing and pushing and shoving and attempting to watch what was going on. 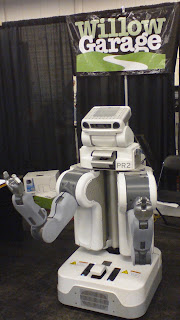 As my above picture alludes to, Grant Imahara was there. He was the voice behind what I guess would be considered a documentary about the heavyweight combat. As he said one point (repeatedly, I might add, while a bleacher-full of people prepared to scream for the camera), "Behind me, in this 40 by 40 foot arena, surrounded by 1-inch thick bulletproof glass, 25 heavyweight combat robots will duke it out in this robot on robot smack-down to the death, or at least to the scrap yard. This is Killer Robots!" This documentary will be airing on Memorial day on the Science Channel, and I might very well be in it. So watch it! It'll be cool.

There were 70 total events, including the combat, at this RoboGames. I arrived on the third and final day, so there were most certainly not 70 events going on. Some of the events I wished to have seen were the MechWarrior fights and very-lightweight autonomous combat robots (I think they both finished earlier in the weekend). But some of the events I did see included two different autonomous robot events. As autonomous vehicles were my reason of attendance, I decided to pay attention to these two. 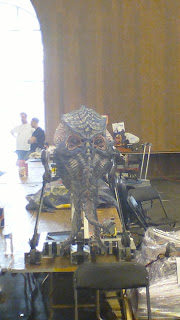 The first of these events dealt with finding and then extinguishing a candle. These robots were maybe the size of mine, but they had many more electronics and sensors and all sorts of things. The two kinds of sensors these robots used were ultrasonic and infrared, which are the kinds I'm using, so I figure that's a good sign. However, these robots had more than three sensors. I assume the reason for this is a practical one - the robots had to navigate corridors, which would involve being aware of everything around the robot. My car only needs be concerned about what is directly in front of it. The robots I saw placed sensors around a cylinder to give it a full view. My approach is going to be to use a servo and scan the environment, which eliminates the need of multiple sensors to cover every angle.

However, there was one thing I did notice about these robots that could help me. Or it could have if I hadn't ordered my parts yet. The IR sensors I saw these robots using were short-range sensors. This means that they measure roughly 0.1 cm to 30 or so centimeters. This makes sense, as it is more important to detect a wall that is right next to you than a wall you'll hit in five minutes. The IR sensors I have are long range, meaning they measure 15 to 150 cm. I don't know why I would need such long range sensors, but I'll find a way to make do. But next time for my knowledge, "Robots use close-range sensors!" 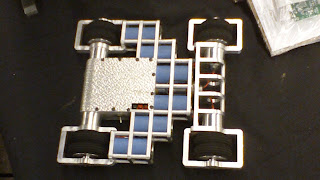 The second autonomous event I saw was a much smaller robot navigating a large maze. This was actually really cool to see. I didn't get a close-up look of the robots, but I assume they used three sensors, one on the front and one on each side. One of the robots I saw just followed the right wall of the maze. That would be a problem, as following the right wall never reached the center. The more advanced robots, though, mapped the maze out as they drove. That would be a cool kind of robot to build (but I'm not building it! mine will be cooler). 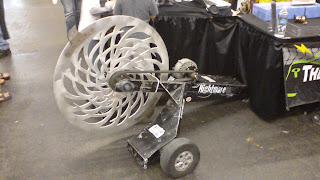 I don't have too much to say about the combat. There was fire and scrap and debris. At one point, a flamethrower burned away some straps on the protective railing. At another, an out-of-control path of destruction broke one of the lights. It was very entertaining.


So that is my not-so-brief summary of RoboGames 2011. It was an awesome event, and I would very much like to go next year. Before then, though, I have the Maker Fair coming up in May which should be just as interesting.