This entry comes with some unfortunate lessons learned that have set me back a bit of time, followed by much cool progress. As of my last entry, I had only tested my IR sensors, even though I'd decided I wasn't going to use them. So when the time came to test my Ultrasonic sensor, I'd discovered that the header pins I'd soldered to it oh-so-long ago were in backwards (I mean, who'd have guessed that there's a right way to doing something?) So in my attempt to fix that issue, I kind of broke the sensor. After that fiasco, I devoted myself fully to hardware, no more soldering: I prepared my pieces of wood so that I can mount my electronics on my car. Once again I discovered that there's a right way to doing something - which I didn't do, though this only resulted in my drilling four unnecessary holes. 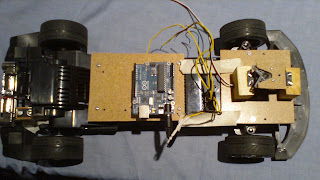 I started off drilling the holes for the main piece of wood on which my Arduino is going to sit. There were four holes to screw into the base, and four holes to screw into the Arduino. I managed to screw those four holes on the wrong side of the board. Fortunately, I simply had to drill four more holes, and now my Arduino sits nicely on my car. Next time, it would be smart to make sure the wood is oriented correctly before you mark the location of the holes. But that wasn't too big of a hang up.

As I mentioned, my biggest hangup was with my Ultrasonic sensor. The header pins I had been using consisted of a piece of black plastic connecting two metal pins. On first glance, the pins look the same. One of the pins, though, is a little thinner, and that is the pin which is meant to be soldered down. Without realizing that, I had somehow soldered the pins correctly to everything except my Ultrasonic sensor. Luck, I suppose. With the wrong end of the pins, the thicker end, soldered to my sensor, my wires (which are intended to clip to the thicker pins) couldn't clip on, denying any electrical connection.

My idea to fix this was to desolder the pins, turn them over, and solder them back in. It's a novel idea, and doesn't seem too complicated. And it probably wouldn't have been, if I'd had two more hands. Trying to hold the soldering iron, hold the sensor, and pull the pins out, all at the same time, resulted in me burning my thumbs. Repeatedly. I also melted a bit of the sensor. And the worst part was that I overheated the board the sensor, destroying the metal contacts designed to connect the pins to the circuit (the solder connects the pins to the contacts). Without these contacts, when I tried to resolder a new set of pins, there was no electrical connection to the board. So I ordered a new sensor which hopefully I won't destroy. I have also gotten a new set of header pins, which make very obvious which side is which. So when all of that stuff arrives, I will have some soldering to do (I also still have to solder my second motor driver, which has arrived but is still sitting in some plastic).

Some better news is that I am infinitely close to finish mounting my electronics to my car. As I said earlier, I have drilled holes in my wood to screw my Arduino onto. That is working great, and is a very steady platform. I have also cut wood, and screwed together, a platform for my servo. My servo is designed to pan in front of the car with the sensor mounted on it. This piece of wood is screwed to the car, but in only two places. To make it sturdy it technically needs at least three mounting points (as a plane is a set of three non-collinear points, and I need to mount it on a plane). My solution is going to be to hot-glue the platform to the car; I just haven't gotten around to it yet.

So my car is looking great - however, I feel that I'm running out of time. I was supposed to finish the track this week, but was sick the weekend so I've slowed down a bit. I hope to finish the track over this weekend, and in the meantime expect to finish soldering and start working on the code. We'll see how it goes.